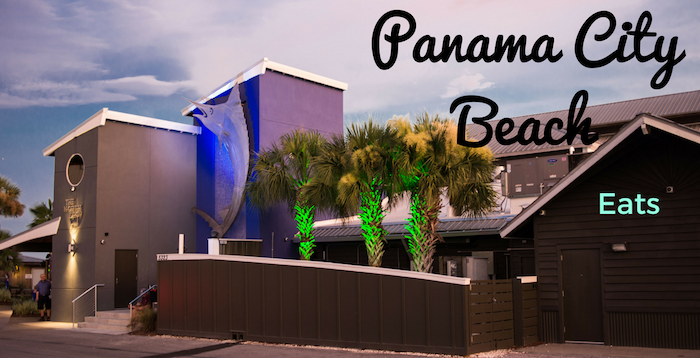 Panama City is not the first place that comes to mind for a vacation, but my in-laws live down there, so we find ourselves in Panama City Beach several times a year. For a recent visit, I researched and selected about twenty restaurant possibilities, even though we were only gonna be there for like three days.  Indeed, we only ended up visiting three Panama City restaurants on my list. There’s always next year…

New in Panama City Beach is the Grand Marlin. Located next to Captain Anderson’s buffet, the real draw is that it is right at the dock so you can see the boats as they come in. I’ve been to Saltwater Grill and despite the upscale decor, I find the food there to be mediocre. So, I had higher hopes for Grand Marlin. 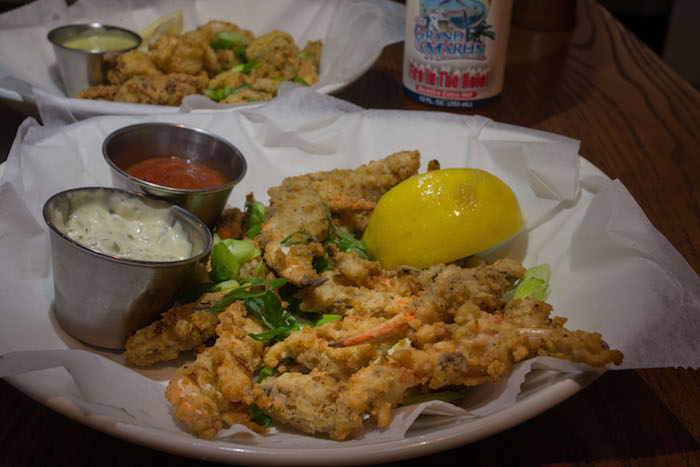 Cocktails are terrific at Grand Marlin in Panama City Beach.In fact if you just want drinks, they’ve got a decent sized bar and the entire upper level is perfect for cocktails. I’d get the Cucu-tini, made with gin, elderflower and cucumber liqueur. Fried crab claws are a bit pricey at $19 but the calamari is good, albeit augmented with other vegetables, diminishing the quality of the dish overall. 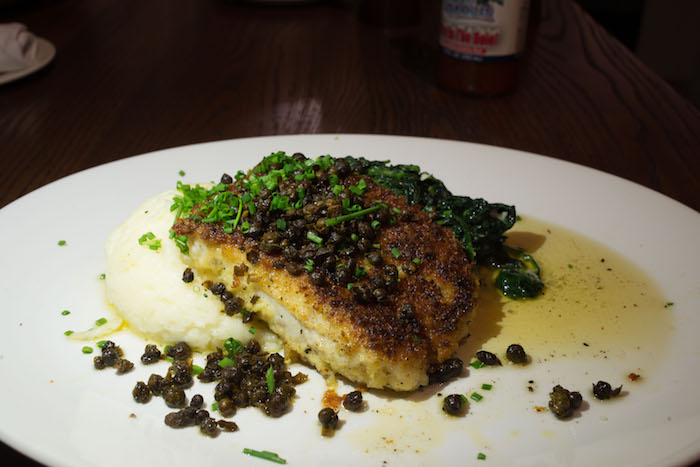 There are many seafood options to choose from at this Panama City Beach restaurant. We tried Salmon with sweet potato hash, tuna, Grouper and scallops. The Grouper Piccata dish was the best of all the dishes, with the salmon being a close second. But I wish restaurants in Panama City Beach would get more creative with sides as three out of the four dishes all had mashed potatoes and vegetable medley. 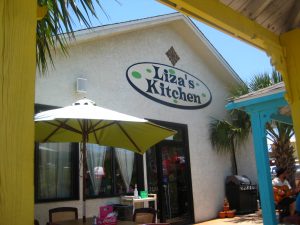 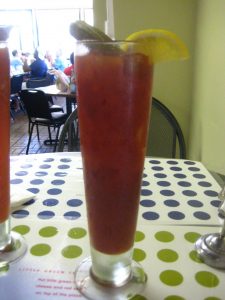 Stop in on a lazy Sunday in Panama City Beach at Liza’s for brunch. The menu looked awesome. Poached eggs topped with Hollandaise sauce over fried eggplant? Yes, please. They don’t take reservations and the place is quite small. You place your order at the counter, pay, and shortly after it is brought to your table. I was worried we’d have a long wait to find a table, but we popped in at the perfect time, easily snagging a table. But by the time we got our food, the line was about 10 deep.

We started off with Bloody Mary’s which were superb. They have half portions of some breakfast items but what’s the point? Mine wasn’t huge and I ordered the full portion. Hubby’s Breakfast Burrito, on the other hand, was quite substantial. I wouldn’t hesitate to order either breakfast again. They also serve sandwiches. 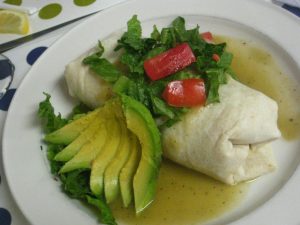 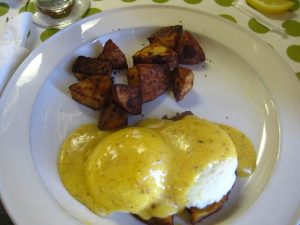 Sisters of the Sea in Panama City Beach

Sisters of the Sea, located at the Grand Lagoon in Pirates Cove Marina in Panama City has been around since 2015 but I love that the new location overlooks the marina. This Panama City Beach restaurant is quite large but I’d expect a wait during peak seasons. 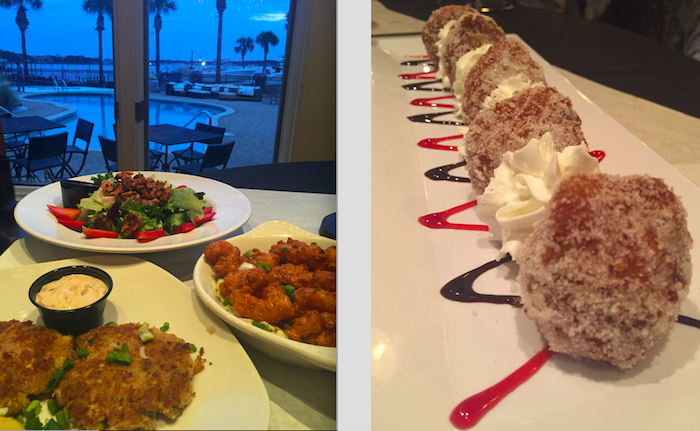 The Shanghai shrimp was plentiful and tasty along with the barely breaded crab cakes were perfect for our trio to share. I wouldn’t hesitate to order either again. Rounding out the appetizer portion with a strawberry salad was a good choice too.

I ordered the Sirens’ Song, a bowl of steamed mussels, shrimp and scallops in a light broth. It won the Best of Show at the Mississippi Gulf Coast-based Chefs of the Coast, and I found it quite tasty and sopped up most of that yummy broth with the plentiful bread. If you don’t love seafood, you won’t be disappointed if you get the Brisket Bowl. Smoked brisket is served over taters along with greens. It matched my dish in quality. 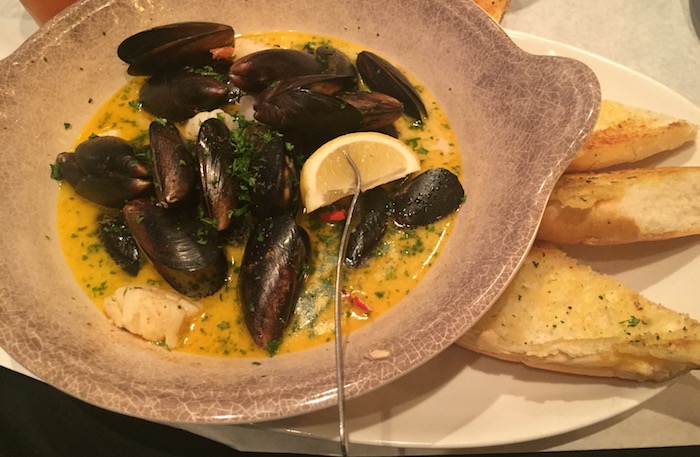 Pictured above with our appetizers from Sisters of the Sea is their signature dessert, fried strawberries. They won a media people’s choice award in Biloxi, Mississippi, and they were worth the hype. After a bunch of ho hum restaurants in Panama City Beach (see Fishale’s review below), this was a welcome change. Plus, they even offer local craft beer. Get the Twisted Sister Ale, brewed exclusively for Sisters of the Sea by local, Nivol Brewing Co.

Is this a taco spot or a speakeasy? 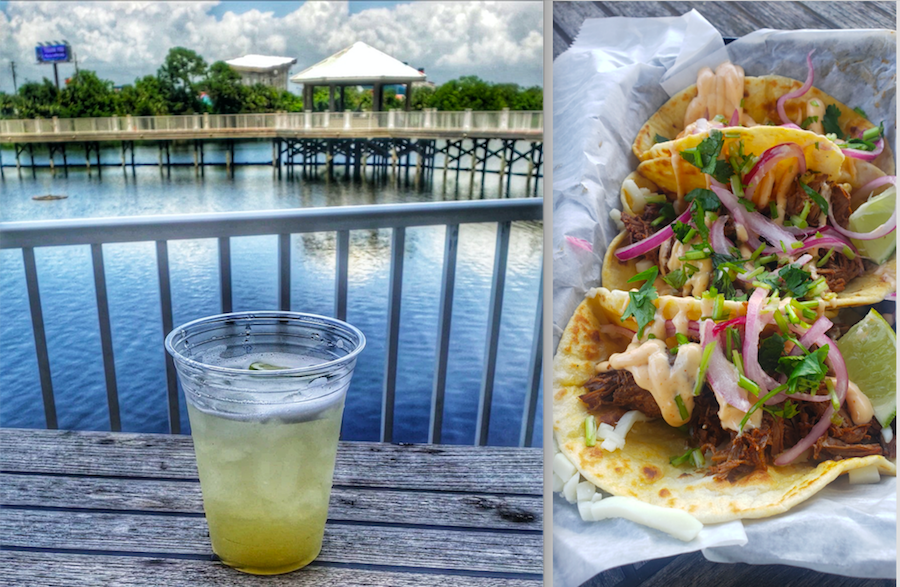 I know, I know, it sounds crazy but finding this popular spot was rather difficult. You see, this Panama City Beach taco joint is located at the base of a huge condo building that is gated. So as you can imagine we were a bit surprised when our GPS led us here. The security at the front was kind enough to let us in on the location. So once you enter you’ll park in the deck and walk over to Juan Taco. Protip: go at an off time because this place is so popular, it will be very crowded. Even late afternoon when we arrived like around 5 pm it was very busy and we had to wait in a line outside.

Get the shrimp tacos and the barbacoa if available those are the best. And Juan Taco fills their tacos full of meat, not all filler. Two were plenty enough to fill me up! Make sure to get a margarita to wash it all down too!

We visited Dat Cajun Place on Memorial Day weekend. Boy where they busy and they handled the rush so well. Though we waited 1.5 hours for a table it was worth the wait. We ate delicious oysters – sorry we were so hungry we gobbled them up before I had a chance to share a picture. Though they have lots of fried dishes at Dat Cajun Place, I opted for the Redfish topped with shrimp. It was lovely and I would definitely get that again. I wish were had been able to hear some live much as i know they have it on some nights at this Panama City Beach beloved restaurant.

The Egg and I in Panama City Beach 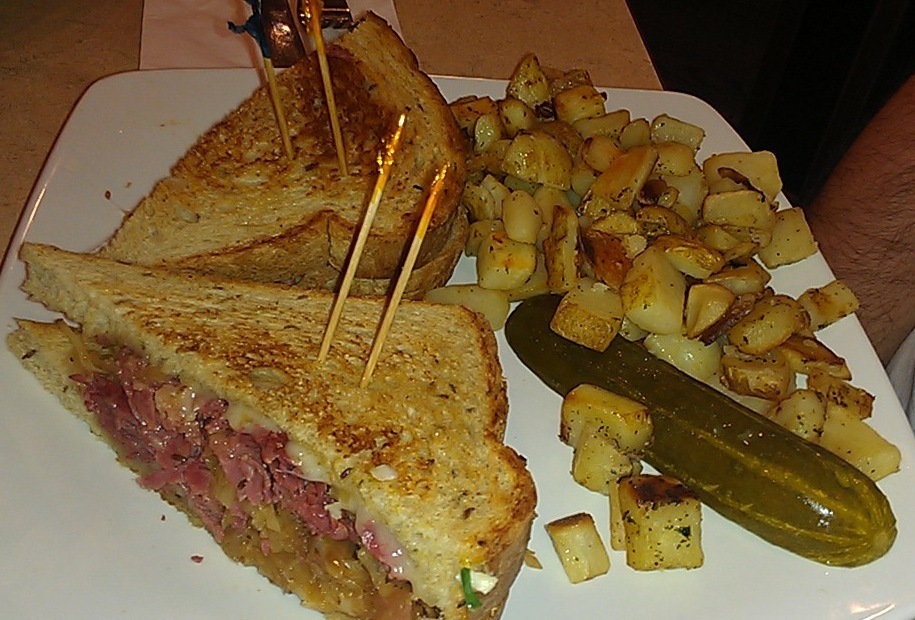 The only time we went out for breakfast / lunch, we stumbled upon the Egg and I. It kind of reminds me of a more upscale IHOP. One of the things that I really liked was that most breakfast platters like pancakes or waffles come with your choice of meat (bacon, sausage). So many breakfast places make you choose: carb or meat. My Spinach, Bacon and Cheese Frittata was quite yummy as was my dining companions’ Reubens. While there are cheaper places to have a meal, this was tasty and efficient. 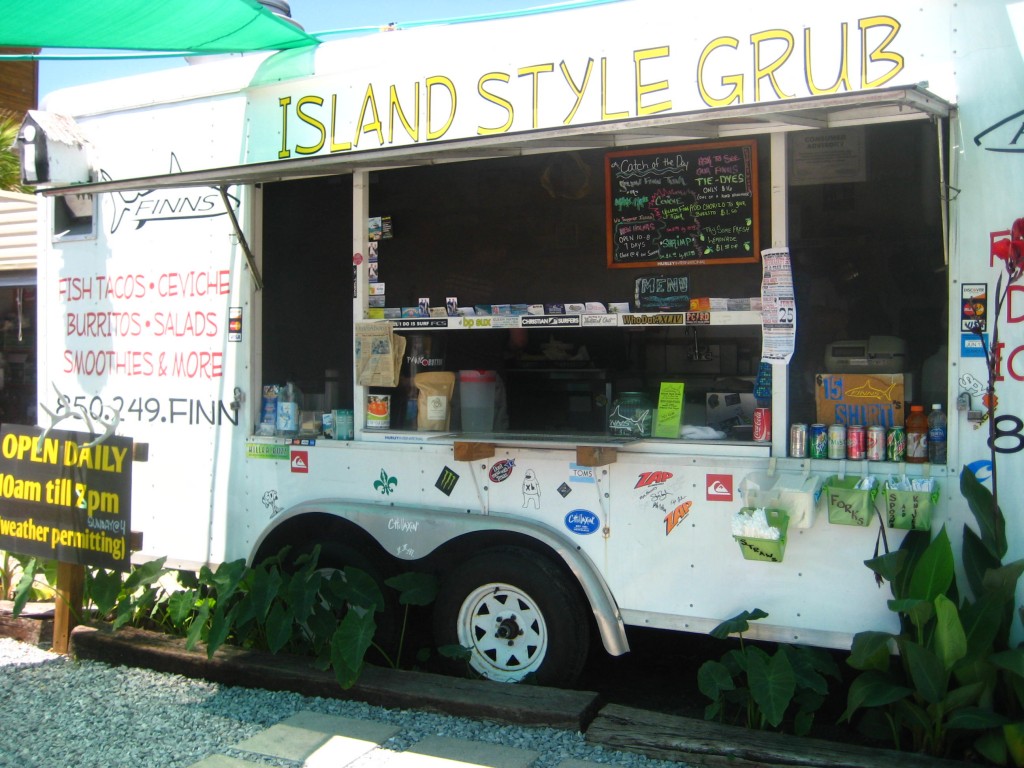 I love food trucks and thrilled with how far the food truck movement has come in Atlanta. Sampling many tasty treats for cheap prices? What’s not to love?

Before the five hour drive back to Atlanta, we decided we’d fill up on tacos at Finn’s Island Grub. Besides tacos, Finn’s Island Grub serves burritos, quesadillas, salads, nachos and even Ceviche. They make bold claims about their Ceviche being “The Best You’ve Ever Had” so a sampling of that was in order too.

The Ceviche at Finn’s Island Grub was delicious. There were large chunks of rare Tuna and the onions, tomatoes, and cilantro were extremely fresh. And our tacos, Blackened shrimp and grilled fish were filled to brim and yummy.

Totally stuffed and as ready as we could be for the drive home, I was really happy we’d chosen to stop at Finn’s Island Grub for our last meal. The only criticisms that I have is that given that it was a food truck, the food took a really long time to be prepared and that the pricing isn’t what you’d expect from a food truck. The portions are more like a restaurant meal rather than a small taste. So, the pricing was more.

Having said all that, I wouldn’t hesitate to eat there again. I’m just glad I know what to expect. If you find yourself in the Panama City Beach area and craving some tasty tacos, definitely plan to hit up Finn’s Island Grub.

In the last couple of visits to Panama City Beach, I’ve passed Fishale’s about a dozen times. I’ll admit, it was the beer list that attracted me and on that aspect Fishale’s didn’t disappoint, with over 65 beers on tap. I had a pilsner and followed it up with a deliciously red ale. Wish I could remember the names, because that was the best part of dinner.

Our server wasn’t friendly or overly helpful at all. Plus, the calamari we ordered was a joke – half of it was fried peppers. A second appetizer, hummus, was decent and worth the price. One dining companion loved his burger, but the fried shrimp was way over breaded and tasteless, and my grouper (pictured below right) was thin and overcooked. With tip, we were at $140. I was the only one drinking (2 beers) and we skipped dessert, which means that was an incredibly overpriced meal.

So, if you’re headed to Panama City Beach, use this as your guide of where to dine (and where not to eat). I travel here regularly with family living there, so please check back as this will be updated with more Panama City restaurant finds! 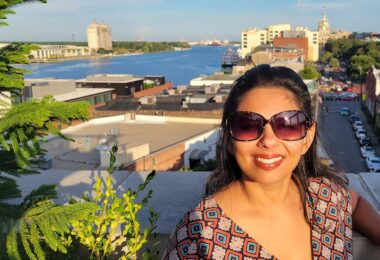 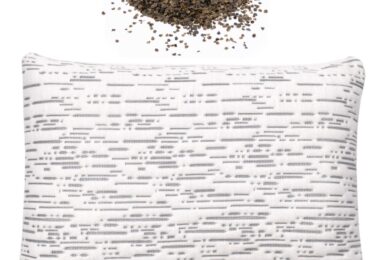 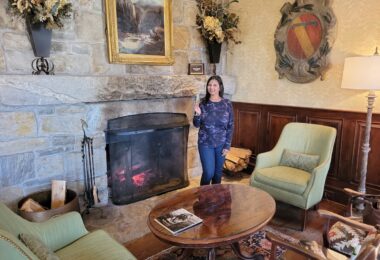 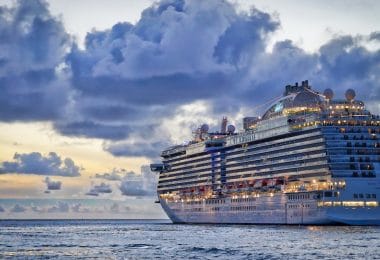 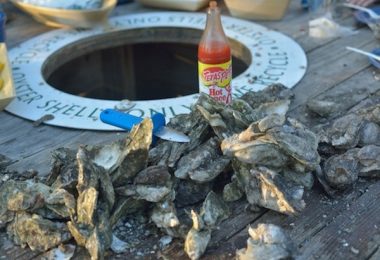 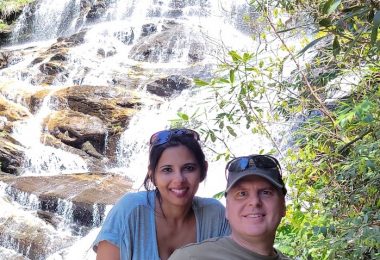